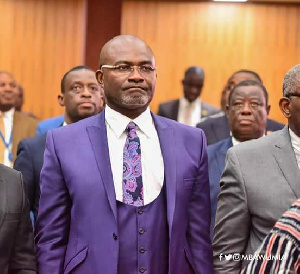 • He is to help make activities in the sector progressive

• He has since pledged to help grow the state-owned company

Assin Central Member of Parliament, Kennedy Agyapong has been appointed as board chairman of the Ghana Gas Company Ltd. by President Nana Addo Dankwa Akufo-Addo.

Prior to this, he was on July 16, appointed as Chair on Parliamentary Select Committee on Defence and Interior to commence investigations into military brutalities in the Upper West Regional Capital – Wa.

As part of his duties as Chair of the board at Ghana Gas Company, Mr. Agyapong is expected to steer the affairs of the key state-owned company in Ghana’s energy sector by providing direction and leadership in the day to day running of the company.

His appointment has been met with some reactions from some persons including social media users who believe his nomination at this time is not appropriate. They say this especially because of some of Ken Agyapong’s past records with controversies; the most recent being his appearance before Parliament’s Privileges Committee for an alleged threat on the life of a journalist – Erastus Asare Donkor.

In this piece, we take a look at some controversies that Kennedy Agyapong has been involved in, in the past:

Comments against parliament in 2018:

The Assin Central MP was dragged before parliament’s Privileges Committee of Parliament after a motion was filed by Minority Chief Whip, Mohammed-Mubarak Muntaka.

Muntaka accused Kennedy Agyapong of making contemptuous public comments about parliament. He was reported to have described parliament as useless.

He subsequently indicated that he used the word ‘cheap’ and not ‘useless’ like was being suggested. Mr Agyapong eventually apologized and stated his readiness to retract the said comments which had been deemed derogatory to the image of the leadership of the house.

In January 2019, Kennedy Agyapong was said to have incited the public against Tiger Eye Team member, Ahmed Suale, by putting his pictures in the public domain and describing him as ‘dangerous’.

He further encouraged viewers to beat him, whilst reiterating his readiness to bear responsibility for that.

Shortly after this, Ahmed Suale was killed by assassins at his residence at Madina, on his way home.

Kennedy Agyapong was mostly blamed for having contributed to his demise through previous statements he had made on air. But the controversial MP denied having anything to do with the murder of the journalist.

The Assin Central MP was cited for contempt after he described a decision by a high court judge to grant an injunction against him as stupid.

According to him, due diligence was not followed and hence the judge was abusing his powers.

He subsequently after a few court appearances, apologized to the judge and judiciary, admitting his comments were harsh and uncomplimentary.

The most recent case has to do with another threat on a journalist.

The lawmaker, following this said in an interview on Net2 TV, “This boy should be beaten seriously. He is so annoying. If I were the President, I would have ordered this boy to be whipped.

The Media for West Africa Foundation (MFWA), has since condemned the comments, considering similar comments were made in Ahmed Suale’s case, before his murder.

He has since been hurled before Parliament’s Privileges Committee to answer for the comments he made.