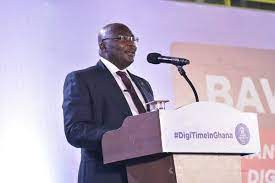 Spread the love
Tweet
Vice President Dr. Mahamudu Bawumia has touted the New Patriotic Party’s (NPP) One District One Factory Programme as one of the best initiatives in the country’s history.

According to the Veep, the initiative to establish a factory in each district of Ghana makes the Akufo-Addo government the best since independence in the setting up of factories.

“We have more factories set up under our government than any other government since independence,” Dr Bawumia stated while addressing an audience at the Ashesi University on Tuesday, November 2.

He opined that the 1D1F initiative is a ground-up approach in stimulating industrialisation.

The event which was themed ‘Transforming An Economy Through Digitalisation: The Ghana Story’, Bawumia also said the Akufo-Addo administration has created more jobs in their first term in the Fourth Republic than any other government.

“We have recorded positive trade balance in four successive years, the best in more than a decade,” he added.

The Vice President further outlined the NPP government’s achievements in the area of digitalisation.

He urged the youth of the country to take advantage of the digital revolution the government is undertaking.

Dr. Bawumia said digitization is a youth revolution, which presents huge prospects for the brilliant Ghanaian youth in terms of job creation, and also to enable them contribute more to the development of the nation.

“The Ghanaian economy has undergone significant digital transformation over the past four years, with many technological innovations and e-commerce springing up.”

“There is a growing body of empirical evidence that illustrates the capacity of digital technology to create jobs, significantly,” he added.

See also  WATCH VIDEO : ‘Shameless’ Kweku Baako has lied to Ghanaians for over 40 years — A Plus

Wed Nov 3 , 2021
Spread the loveTweet Ghana Premier League side Legon Cities have parted ways with striker Asamoah Gyan following the expiration of his contract. Asamoah Gyan becomes free agent after being released by Legon Cities The former Sunderland forward returned to the Ghana Premier League last season when he joined the Royals on a one-year […]