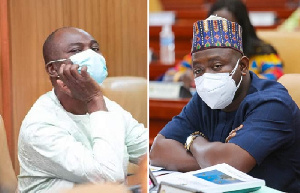 Assin Central Member of Parliament, Kennedy Agyapong, all things being equal will be appearing before Parliament’s Privileges Committee to answer a motion that was filed against him by a fellow lawmaker.

Tamale North MP and former radio journalist, Alhassan Sayibu Suhuyini petitioned the Speaker of Parliament, Alban Bagbin, relative to a threat made by Agyapong on a journalist with Kumasi-based LUV FM.

Today (July 26), the Committee led by first deputy Speaker of Parliament, Joe Osei Owusu will sit to hear the petition with Suhuyini expected to testify.

GhanaWeb looks back at how the case has travelled since Agyapong launched his threat on Erastus Asare Donkor.

Whiles appearing on ‘The Attitude’ show’s July 9 edition on Net 2 TV, which Kennedy Agyapong owns, the lawmaker in discussing media coverage of the violence in Ejura faulted Multimedia and especially their journalist who had at the time appeared before a ministerial Committee of Inquiry sitting in Kumasi.

“That boy should be beaten seriously. He is so annoying. For the foolish submissions he made before the [ministerial] committee, we have to beat the hell out of him. If I were the president, I would have ordered this boy to be whipped,” Agyapong said.

In the letter, dated July 13, 2021, Eratus’ employers wrote to the Deputy Regional Police Commander in the Ashanti Region, requesting security protection for the journalist.

They also called for a thorough investigation into the threats issued by Agyapong.

The letter was copied to among others: Chief of Staff at the Presidency, the Asantehene Otumfuo Osei Tutu II, Ministers of Interior and National Security and the Speaker of Parliament.

Suhuyini averred that the Assin Central lawmaker by his utterances had brought the name of lawmaking chamber into disrepute.

The Speaker subsequently referred the issue to the Privileges Committee for action before reporting back to the whole.

He also cautioned members to be careful with their utterances especially in the public space stresing that Parliament will protect them whiles on the floor but they had to be responsible out of the house as well.

“It is my hope that this [issue] will be looked at differently, and he will be seen as one that has engaged in many infractions and, perhaps, the mercies that he enjoyed previously may not be experienced. I also hope that the committee will approach this as a national issue and not a partisan issue,” Suhuyini said on Citi FM.

“The aim is not to bastardise Kennedy Agyapong or portray him as a member of the NPP who deserves condemnation. The aim is to protect the life of Erastus Asare Donkor because when we failed to act in the case of Ahmed Suale, we all saw what happened and then again, encouraged responsible speech that brought about some respectability to the dignity of Parliament,” he added.

“Must that stupid Suhuyini take it to Parliament. He is stupid. I don’t care if he is an MP. He cited Ahmed Suale so I shouldn’t joke with it. This is not the first time he is linking me to Ahmed Suale. You are a foolish boy,” he said.

“What I said was that for such a person you beat the hell out of him. I said that if I were the president. Am I the president? It was a hypothetical statement that I made.

“I’m surprised the issue has been taken to the Privileges Committee but we will go there. There are discerning MPs who don’t just consume information. You are bringing that propaganda job to Parliament. There is a bias reportage by Joy that resulted in the death of the two,” an upset Agyapong commenting on the issue on Net2 TV’s ‘The Seat Show.’

According to the Multimedia group, police confirmed to their lawyers that the case had been move to Accra because the Member of Parliament had issued the said threat in the national capital.

“The Ashanti regional police say they have taken a statement from Erastus Asare Donkor, as a company, our lawyers went with him to the police headquarters in the Ashanti regional capital. They say they are done with their part of the investigations.

“They have however forwarded the case docket to the police headquarters here in Accra to continue with the probe because the comments by the Assin Central MP were made in the national capital,” Joy FM journalist Evans Mensah disclosed on Wednesday, July 21.

Today, Suhuyini will have the opportunity to face his colleague and verbal abuser as the Privileges Committee sits on his petition.

Speaking to journalists in Parliament on Thursday, July 23, the Committee Chairman and Bekwai lawmaker, Joe Osei Owusu said the matter will be heard as if it is a court trying an accused person.

“It is a member (Alhassan Sayibu Suhuyini) of the House who petitioned the Speaker so it is the petitioner who will appear before us. If the petitioner decides that he needs somebody else to assist him to prosecute his case, why not.”

“Remember that when it comes to the privileges committee, it is more or less a trial so our process is no different from the court”.
“Whatever or however you put your case, you will be guided by the rules of the house, nothing else”.

Mon Jul 26 , 2021
Spread the loveTweetA Ghana Air Force operated plane charged nearly three times the amount that commercial operators took to evacuate Ghanaians at the height of the Coronavirus pandemic last year. This is according to an analysis of responses filed in Parliament last week Thursday by the Minister of Foreaign Affairs […]