How Akufo-Addo, Ofori-Atta and men of God ‘lied’ about the National Cathedral

A twitter user by name S3RIO, tweeting @5_Star_Hustler has chronologically arranged news items, that sought to expose the president, Nana Akufo Addo, the minister of finance, Ken Ofori-Atta and some men of God over who are allegedly behind the building of the national cathedral.

The story of the government making plans to build a national cathedral was met with mixed feelings, as many Ghanaians thought it was not needed, looking at the many problems the country was facing in the health, education, social sector among others.

Many Ghanaians, including celebrities and civil societies came out to condemn the initiative, especially when the land allocated for the building was in a prime area with the potential to cause traffic, and also because the land already housed judges in the country, and a demolition would cost the country.

The fierce resistance from Ghanaians, caused the presidency to deny being responsible for the building of the cathedral, but many news items as arranged by S3RGIO, suggests otherwise.

Read the tweets below: 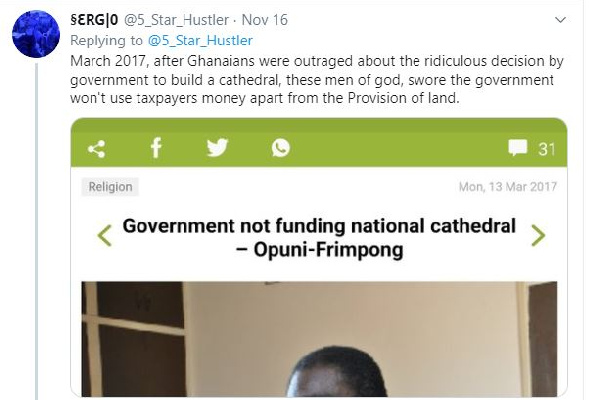 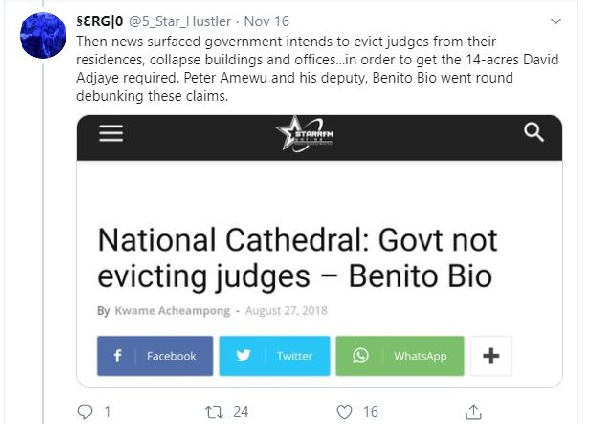 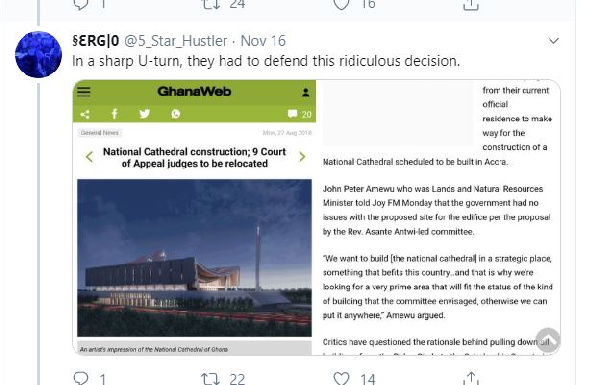 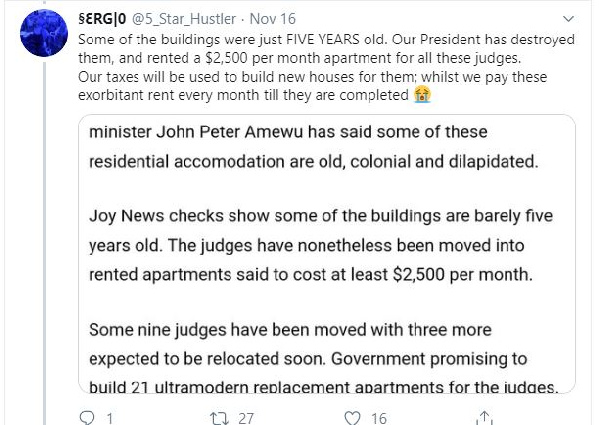 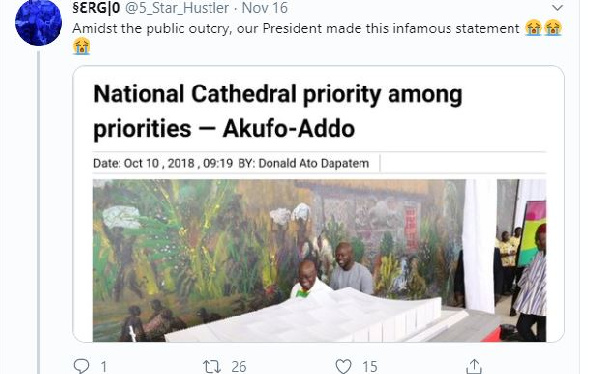 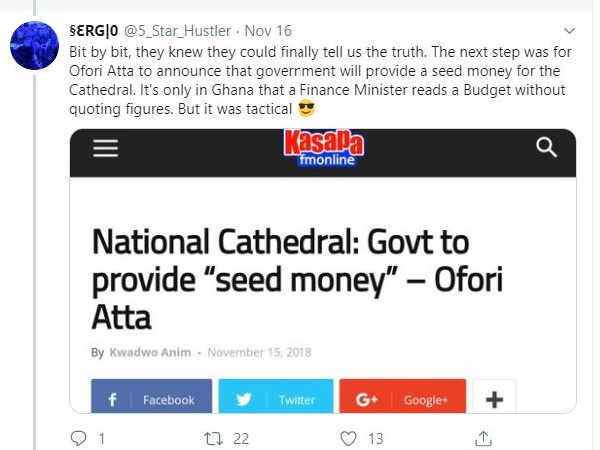 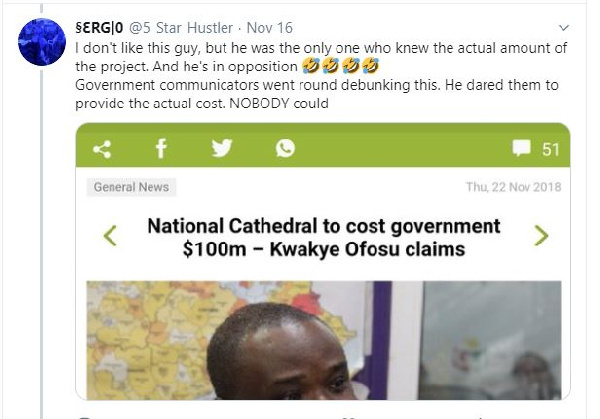 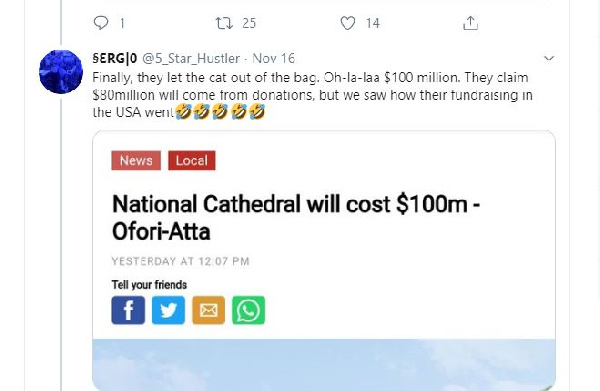 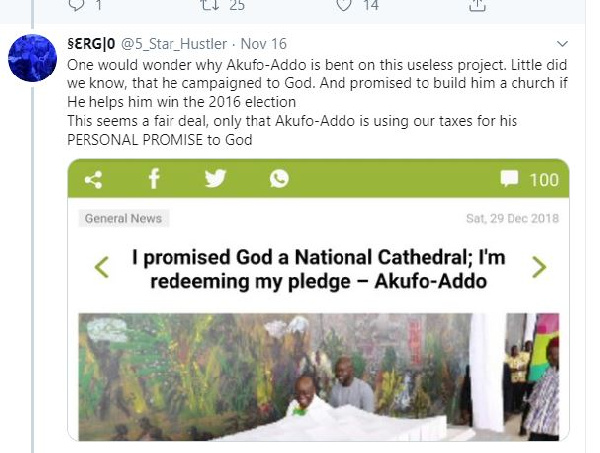 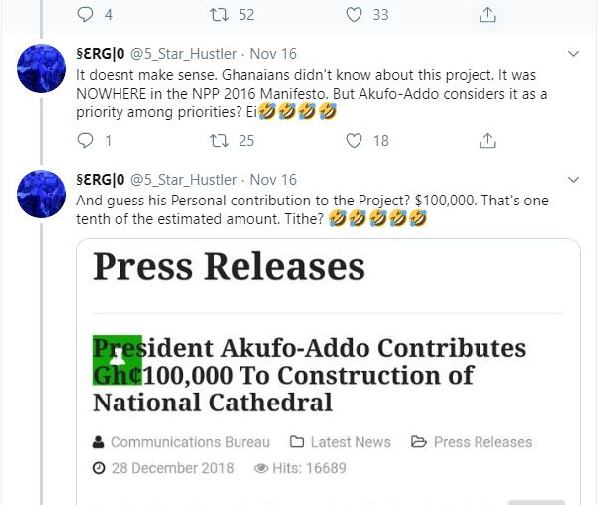 How Akufo-Addo, Ofori Atta and ‘Men of God’ have lied about the National Cathedral. These people have no shame

253 people are talking about this
Source: www.ghanaweb.com

Mahama has a long way to go in becoming President – Obinim

My auntie introduced me to lesbianism – Lady reveals

Africa Extreme Pioneer educational Tour is to embark a Libaray campaign tour across some francophone countries including dubbed bringing practical knowledge to our African continent.

I’m unaware of any intimidation at registration centres – Akufo-Addo

Asanteman Europe Association Set To Donate To Asantehene and Other Institutions

CONCERN ASSEMBLY MEMBERS OF SEKYERE EAST PRESS CONFERENCE Good day members of the media, we have met here today to set the records…

As today, 31st July, 2020 marks the celebration of the Eid-ul-Adha by our Muslim brothers across the globe, The Bono-East Regional youth Wing cease…

Eid-ul Adha is a festival celebrated by Muslims across the globe to mark the sacrifice Ibrahim(Abraham) made to Allah. It is celebrated…

As Muslims celebrate Eid-ul Adha to mark the sacrifice made by Abraham to Allah, I join all well wishers across the globe to…